+ The Black Hood was originally a golden age character created by MLJ Comics, later known as Archie Comics. The Black Hood first appeared in Top-Notch Comics #9, October 1940 and became one of MLJ's most popular characters. He also had his own title, Black Hood Comics, a pulp magazine, and his own radio show. In recent decades, the Black Hood (along with other Archie Comics superheroes) has been licensed and sporadically published by DC Comics. In his first incarnation, the Black Hood was a costumed man of mystery who had been trained by a hermit to battle evil. The comic book was at first intentionally vague as to whether he possessed superpowers, or simply had the unusual strength, agility, and healing abilities that costumed crime fighters seem to possess. His real name was Matthew Kipling "Kip" Burland, an ex-cop who had been framed for grand larceny and left for dead by a villain known as The Skull. Burland eventually cleared his name, but continued to wear the costume. The Black Hood is not the only man of mystery whose secret identity is a police officer. Other superheroes who were also cops included Charlton's Blue Beetle and DC's Guardian. The Black Hood enjoyed popularity for a while until he dropped from the covers and was gradually replaced by funny animal characters, as the popularity of the superhero genre faded in the late 1940s. His last few stories were as a private detective without wearing a costume.- 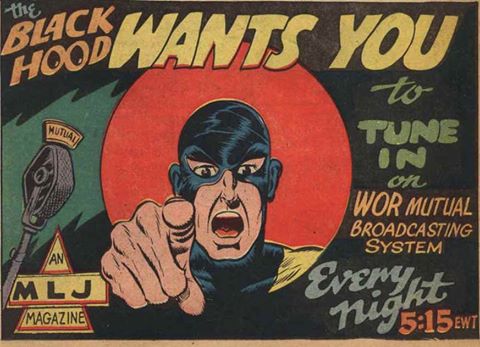