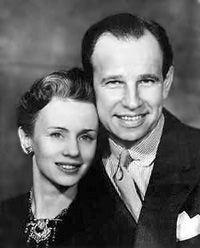 + Marriage Lines is a British television sitcom first broadcast from 1961 to 1966 which was made in black-and-white. The series gave Richard Briers and Prunella Scales, its lead stars, a significant boost in their careers. At first titled The Marriage Lines, the programme was written by Richard Waring, and was later adapted for radio. Marriage Lines was adapted for radio from 1965 to 1967, with Richard Briers and Prunella Scales once again starring. The scripts were also written by Richard Waring. The first series, of 13 episodes, ran from 21 May to 13 August 1965 and the second series, of 13 episodes, from 19 March to 11 June 1967.-WikiPedia Click here to read more about Marriage Lines

Spoiler : I enjoyed the first show very much. I cannot quite figure out why there is a picture of Hugh Cronyn and Jessica Tandy on the page, though.