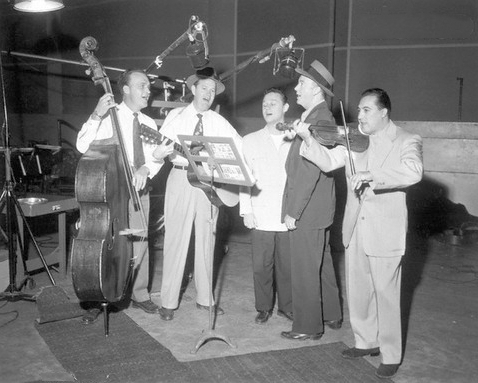 + Foy Willing (May 14, 1914 – July 14, 1978) was a singer, songwriter, musician, and bandleader who performed Western music and appeared in Western movies. He formed the Western band Riders Of The Purple Sage. In 1942, Willing co-founded Foy Willing and the Riders of the Purple Sage with Iowa musician Al Sloey. The band included Patti Page on vocals, fiddler Johnny Paul, and accordionist Ken Coopern. The band's first hit, "Texas Blues", was written by Willing. They grew in fame and over their ten year career, performed as the musical group backing up Monte Hale and Roy Rogers for Republic Studios. Willing and his band appeared as performers in many Western movies in the 1940s and early 1950s with Charles Starrett, Monte Hale, and Roy Rogers and Dale Evans. The Willing-led Riders of the Purple Sage disbanded in 1952.-WikiPedia Click here to read more about Foy Willing And The Riders Of The Purple Sage

Be the first to comment on "first song happy rovin cowboy "