+ Five-Star Theater (aka 5-Star Theater) premiered on Monday, November 28, 1932 on NBC's Blue Network, sponsored by Colonial Oil Company and Standard Oil (New Jersey). It was broadcast every weeknight at 7:30pm, but with a different program of comedy, music or drama each night. Beagle, Shyster, and Beagle was a Monday night comedy program with Groucho Marx as attorney Waldorf T. Beagle and Chico Marx as his assistant Emanuel Ravelli. For the first three episodes, the series was called Beagle, Shyster, and Beagle; however, a lawyer from New York called Beagle contacted NBC and threatened them with a lawsuit. It was then retitled Flywheel, Shyster, and Flywheel. The series depicted the misadventures of a small law firm, with Groucho playing attorney Waldorf T. Flywheel, and Chico playing Emmanuel Ravelli, a character lifted directly from the 1930 film Animal Crackers. The Josef Bonime Orchestra aired on Tuesdays with baritone John Charles Thomas. Wednesday night showcased a dramatic anthology, The Esso Theater. Opera was featured on Thursday night with the Aborn Opera Company. Charlie Chan was heard on Friday evenings.-

Spoiler : FUNY FUNNY guys.my kids dont see them as funny, saying their jokes are corney. But I tell them, those "old" jokers werew THEIR jokes. they were NEW when they said them. 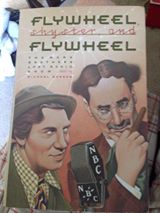