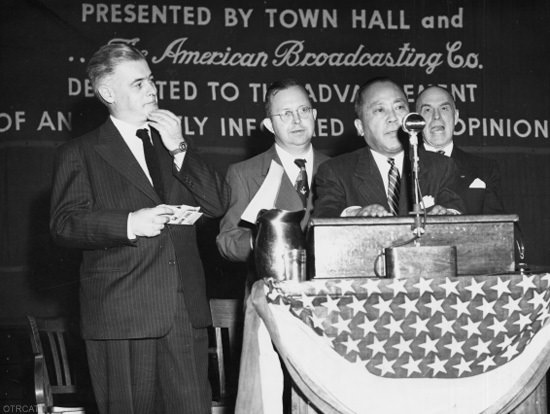 Every week, the nation listened as experts debated issues from communism to social security to the type of music America wanted. Modeled after New England Town Hall Meetings, each show opened with a "town crier" clanging a bell and an active audience that would "boo" panelists. Click here to read more about Americas Town Meeting Of The Air

Spoiler : This series began broadcasting on May 30, 1935, and lasted until 1956. Originally it was broadcast from 10 to 11 pm Eastern Time from Town Hall located at 123 West 43rd St in New York, under the auspices of the League for Political Education. It was presented over the facilities of NBC, and New York Station WJZ with a nationwide hookup. At the time, America's Town Meeting of the Air was one of the most important public service projects of NBC. It attracted up to 3,000,000 radio listeners weekly, more than 1,000 discussion clubs were formed to listen to the broadcasts and to debate the issues raised, and transcripts of each program were widely distributed at modest cost to the radio audience, teachers and schools. The format of the show usually involved a pair or a panel of speakers representing different perspectives followed by a question and answer period from the audience. The first program in the series, Which Way America? Communism, Fascism, Socialism or Democracy? featured speakers energetically advocating each of these alternatives. Occasionally advocacy threatened to become physical and at least one libel suit was filed. But for the most part the speakers endeavored to be rational and respectful of their opponents The audience was a very different matter, difficult to hold in check, often entering into contentious debates with the speakers in a kind of radio free for all. The moderator, George V. Denny, Jr., associate director of the League for Political Education which originated the series, loved the rough and tumble of the program and, while working energetically to keep discussions from descending into riots, also loved the drama of verbal bloodletting. Moderated by George V. Denny, jr., the programs included a broad range of contemporary notables from Eleanor Roosevelt to Norman Thomas and Dorothy Thomson, Mary Mcloed Bethune, Rexford Tugwell and Langston Hughes.

AMERICA'S TOWN MEETING OF THE AIR