+ Father Charles Edward Coughlin (October 25, 1891 – October 27, 1979) was a controversial Roman Catholic priest at Royal Oak, Michigan's National Shrine of the Little Flower Church. He was one of the first political leaders to use radio to reach a mass audience, as more than thirty million tuned to his weekly broadcasts during the 1930s. Early in his career Coughlin was a vocal supporter of Franklin D. Roosevelt and his early New Deal proposals, before later becoming a harsh critic of Roosevelt as too friendly to bankers. In 1934 he announced a new political organization called the "Nation's Union of Social Justice." He wrote a platform calling for monetary reforms, the nationalization of major industries and railroads, and protection of the rights of labor. The membership ran into the millions, resembling the Populist movement of the 1890s. After hinting at attacks on Jewish bankers, Coughlin began to use his radio program to issue antisemitic commentary, and later to rationalize some of the policies of Adolf Hitler and Benito Mussolini. The broadcasts have been called "a variation of the Fascist agenda applied to American culture". His chief topics were political and economic rather than religious, with his slogan being Social Justice, first with, and later against, the New Deal. Many American bishops as well as the Vatican wanted him silenced, but it was the Roosevelt administration that finally forced the cancellation of his radio program and forbade the dissemination through the post of his newspaper, Social Justice.-WikiPedia

Spoiler : I grew up listening to Father Charles Coughlin Sundays at the Shrine of the Little Flower in my hometown of Royal Oak, Michigan in the 50's & 60's. The radio priest. Yes, I know he was controversial, but I knew him as a famous person. During mass, just when I was about to fall asleep, he would bang his fist on the pulpit, startling me awake! He came to visit us at catechism occasionally.

Reply
Spoiler : I also attended church at Royal Oak (and parochial school there too).

Reply
Spoiler : He was the Jerry Falwell of his time

Reply
Spoiler : Father Coughlin first took to the airwaves in 1926 at WJR-Detroit, Michigan, broadcasting weekly sermons over the radio. In 1931 the CBS radio network dropped free sponsorship, so he raised money to create his own national network, which soon reached millions of listeners with his broadcasts that had shifted from theology to economics and politics. Just as the rest of the nation was obsessed by matters economic and political in the aftermath of the Depression, so too was Father Coughlin. Coughlin had a well-developed theory of what he termed By 1934 Coughlin was perhaps the most prominent Catholic spokesman on political and financial issues, with a radio audience that reached millions of people every week., and Father Coughlin was an early and passionate supporter of President Roosevelt, since he viewed FDR as a radical social reformer like himself. Roosevelt's rhetoric during his inaugural address implicitly promised to "drive the moneychangers from the temple." This was music to Coughlin's ears since a core part of his own message was monetary reform. 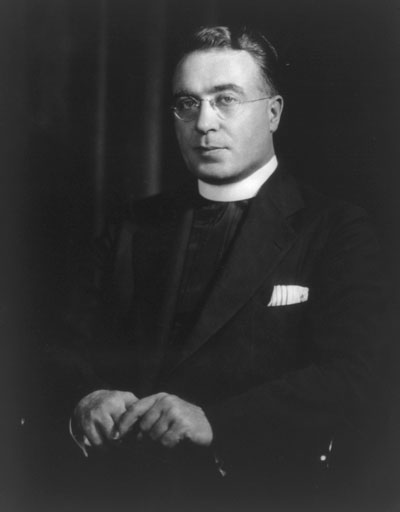