Aired 1952 - 1954 I Was a Communist for the FBI rode the coattails of the Red Scare, aired even though the FBI refused to cooperate with its production. Based on the book by the same name by Matt Cvetic, an undercover operative who joined the Communist Party to spy from within.

This series capitalized on the new Red scare of the early 1950s: 78 episodes were recorded, without any assistance from the FBI, which refused to cooperate.

It didn't matter: anti-Communist hysteria was at a peak, and by the end of 1952 I Was a Communist was scheduled on more than 600 stations. The show was based on the book (and subsequent movie) by Matt Cvetic and purportedly told of his adventures as an undercover operative who joined the Communist Party to spy from within. Many of the stories contained double-edged conflicts: Cvetic constantly jockeyed for information, walking a tightrope among suspicious Party officials while unable to reveal his true mission even to his family, who shunned him. Communists were stereotyped, much as Hitler's Nazis had been a few years before: they were seen as cold and humorless, with their single goal to enslave the world. Cvetic could never be sure who might be a Party spy. Dana Andrews gave it on air of Hollywood glamour, always closing with these words: "I was a Communist for the FBI. I walk alone." Click here to read more about I Was A Communist For The FBI

Spoiler : Featuring all of the existing episodes of this crime drama starring Dana Andrews as the real life double agent Matt Cvetic who penned a novel on his adventures, which was made into a movie, and the radio and TV series. Cvetic was an FBI undercover agent that joined the Communist Party as a spy. The closing of the program was great, as Andrews said, "I was a Communist for the FBI. I walk alone." The series was syndicated by ZIV, and was broadcast from 1952 to 1954 by stations that bought it including WOR-Mutual-New York.

I WAS A COMMUNIST FOR THE FBI

Reply
Spoiler : One of the best OTR radio shows out there. Hopefully the 3 or so missing episodes get found so we can have the complete series. According to wikipedia- "At least two transcribed dramas, I Was a Communist for the FBI and Bold Venture, were distributed to more than 500 stations each." There has to be copies in the basement of some small town radio station.

Reply
Spoiler : I love this radio series, not for its political slant other than as an interesting reflection of the era in which it was produced, but as a highly suspenseful drama about an undercover agent. Ever since I was a kid I have loved stories about heroes who have to go undercover to ferret out the evildoers; they are inherently loaded with bated tension and nervous anticipation throughout. When they are as well written and produced and especially acted as this series was, it is quite the roller coaster ride listening to it. The actual person that this series was supposedly based on was no real life hero as it turns out, but that's really of no importance as the drama here is key and it's fantastic.

Reply
Spoiler : Not on the top of my list (not a Dana Andrews fan), but I wouldn’t change the channel If it came on). Some of the stories have been as good as any detective or drama. As you note, an interesting slice of America back in the day.

Reply
Spoiler : Interesting ZIV never did a TV Series based on the radio show - it would have been a good companion to "I Led 3 Lives" - perhaps They were too similar in content...

Reply
Spoiler : Cvetic was a nutcase and created a lawsuit asking where his millions were... so ZIV went with Philbrick for the television rendition. Interestingly, two of the tv episodes of LIVES were adapted from the FBI radio rendition.

Reply
Spoiler : This is a really good show. A bit over the top and campy at times, but thoroughly entertaining.

Reply
Spoiler : I really like this show. It can get a bit silly but great premise and some really suspenseful situations. I'd give it a shot no matter what your politics.

Reply
Spoiler : It was the show that rekindled my interest in OTR. I had listened to Dragnet on the radio when I was in college in the early 90s in LA (KNX would rebroadcast them). Then I moved back to Seattle after graduation. I inherited my grandfather's library when he passed, and among the books was "The Big Decision" by Matt Cvetic. I found it a very interesting read. Later I saw "I Was a Communist for the FBI" in a cassette series at the local library and, recognizing Cvetic's name on the cover, checked it out. I've been avidly listening to OTR ever since.

Reply
Spoiler : The movie from 1951 is really over the top, but well acted, as always, by Frank Lovejoy and enjoyable enough once you get passed all the preaching.

Reply
Spoiler : I like listening to the show. I am constantly amazed at how stupid the Communists are and how easily fooled they are dealing with Dana Andrews character.

Reply
Spoiler : Of course, in real life you know the Communists were not stupid at all. It's kind of like Hogan's Heroes. They made all the nazis look stupid and silly, and in fact most were quite brilliant. Evil, but very intelligent.

Reply
Spoiler : We were so scared of the Red Menace back then. During those years my father would never join any organization save for the Knights of Columbus or the VFW out of fear they’d be found to be a Communist front organization.

Reply
Spoiler : I like it too, even though the McCarthy like anti-communist stance is completely abhorrent to me, it’s full of intrigue and angst that works well on the radio.

Reply
Spoiler : Can't stand the show, either. Politics have nothing to do with it and I don't care if the real-life person was a hero or a schmuck. I don't like the stories or Dana Andrews (at least not in that role).

Reply
Spoiler : Love it. Listening to Dana Andrews in this led me to watch many of his movies. I also like Truman Bradley, the announcer. Very distinctive voice.

Reply
Spoiler : This was aired on WGN in Chicago a couple of years after it was syndicated. I too enjoy the series.

Reply
Spoiler : Yes these are some stories that in one way or another are true matters of record .Reasons out country still is here.

Reply
Spoiler : I just found the plots on it a little too silly - certainly some good acting and some good scenes here and there, but it sometimes stretches credibility in how some of the characters or organizations behave. I find it kind of average, as some of the 50s syndicated radio and tv material goes.

Reply
Spoiler : I enjoy the show - listened to several episodes last night. Much of it is so applicable to today!

Reply
Spoiler : OVE this fascinating show. Just listened to it on the way to work. I was riveted. I was at work before I knew it.

Reply
Spoiler : It's so intense it has me on the edge of my seat! This is a truly great show, and Dana Andrews is so poignant when he "walks alone."

Reply
Spoiler : "I Was a Communist for the FBI" (1952-1953) starred Dana Andrews as an FBI agent who was undercover in a local Communist Party cell. As Russian intervention has been in the news lately, it may be worth a listen. I enjoyed many of the episodes.

Reply
Spoiler : 78 episodes, I believe. Syndicated. Was also a book and a 1951 Academy Award-nominated movie.

Reply
Spoiler : Anyone know if the stories are true? The opening monologue implies that Matt Sebetic (?) and the stories are factual. I did not realize the show only lasted a year...but 78 episodes is a lot for a year, isn't it?

Reply
Spoiler : Cool. Do have fun listening to that show "comrade" Dave

Reply
Spoiler : Well, it's Dana Andrews! Who can possibly outdo him? Nobody!

Reply
Spoiler : Once you’ve seen him figure out who didn’t kill “Laura”, you know nothing gets by him. 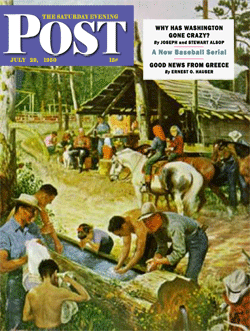 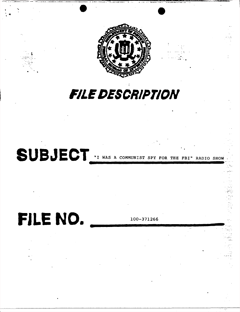 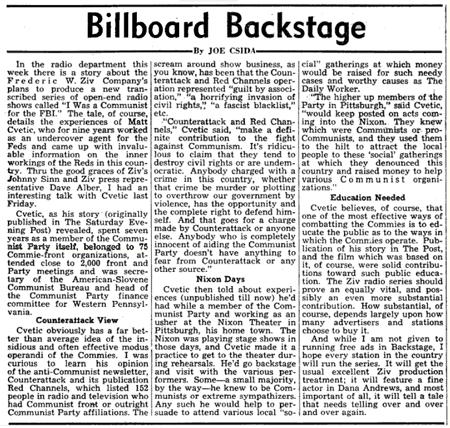 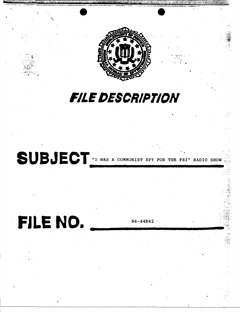 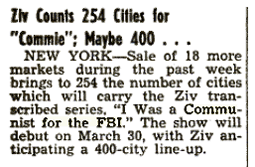 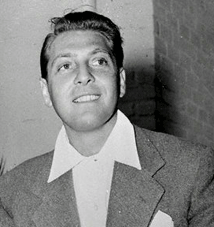 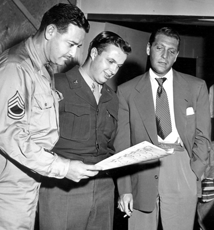 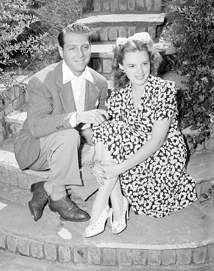 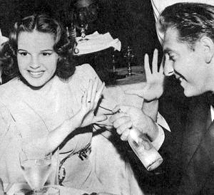 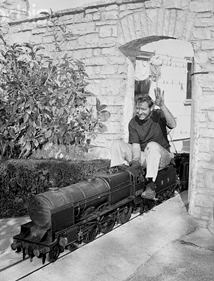 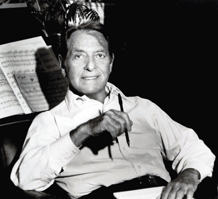 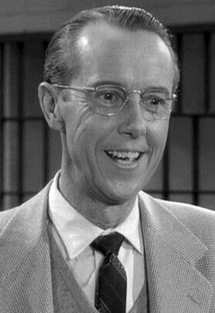 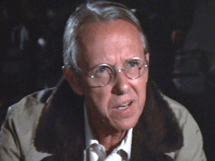 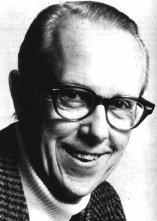 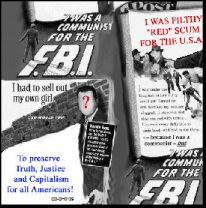 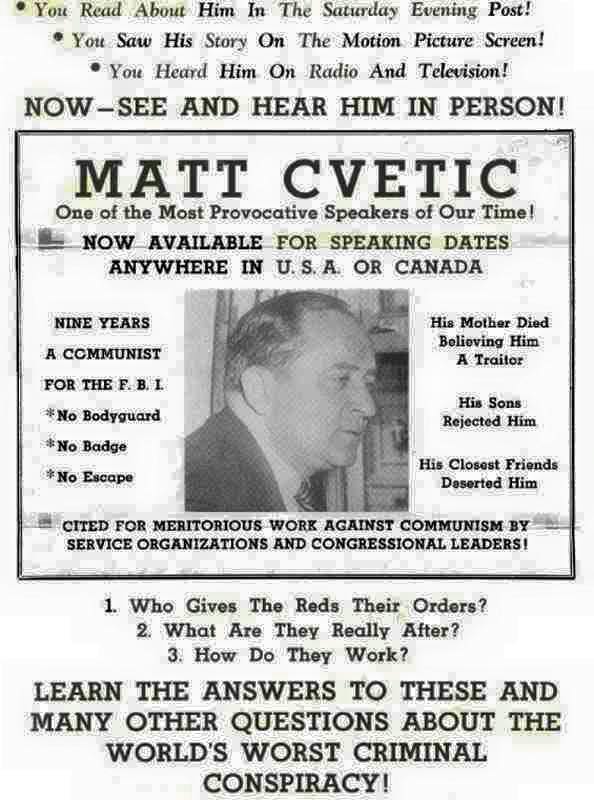