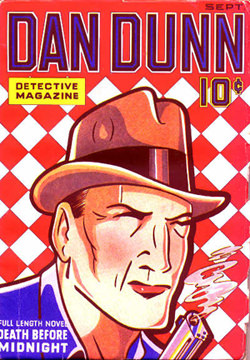 + Dan Dunn was the first fictional character to make his debut in an American comic magazine, making him the forerunner of many comic book heroes. Created by Norman Marsh, he first appeared in Detective Dan, Secret Operative No. 48, a 1933 Humor Publications magazine, which was canceled after one issue. In 1937, Dan Dunn was produced as a 15-minute radio program which ran for a total of 78 episodes.-WikiPedia Click here to read more about Dan Dunn Secret Operative 48