+ Stop Me If You've Heard This One was a comedy radio series, created by the actor-humorist Cal Tinney (February 2, 1908-December 2, 1993) and sponsored by Quaker Oats. Hosted by Milton Berle, it aired Saturday evenings at 8:30pm on NBC beginning October 7, 1939. The premise was that listeners received prizes for jokes they submitted to the program. The panelists, Harry Hershfield and Jay C. Flippen, were known as "the gagbusters," and their job was to recognize the joke, interrupt Berle and finish telling the joke. If they failed, the listener received more prizes. The show's list of guest panelists included Tinney, cartoonist Peter Arno, Harry McNaughton, character actor Lionel Stander and Ward Wilson. Dan Seymour was the announcer. The program's director was Joe Rines, and music was supplied by Del Courtney, Ben Cutler and Vincent Travers. Hershfield was replaced by "Senator" Ed Ford shortly before the series ended on February 24, 1940. Nine months later, Ford, Hershfield and Wilson became regulars on the more popular panel show of joke-tellers, Can You Top This?, which had a long run of 14 years.-WikiPedia 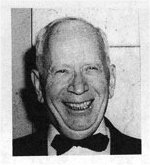