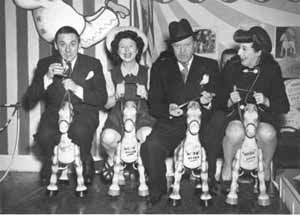 + It's That Man Again (or, commonly, ITMA) was a BBC radio comedy programme which ran from 1939 to 1949. The title refers to a contemporary phrase concerning the ever more frequent news-stories about Hitler in the lead-up to World War II, and specifically a headline in the Daily Express written by Bert Gunn. This was humorously transferred to Tommy Handley, the popular comedian around whom the programme was developed. The scripts were written by the prolific Ted Kavanagh. ITMA is believed to have played a major role in sustaining morale on the UK's "home front" during World War II. The headline which inspired the name of the show appeared in the Daily Express of 2 May 1939, on the bottom of the front page, above a story about Adolf Hitler leaving his Chancellery on a mystery journey. The first show was broadcast on 12 July 1939, part of an initial run of four shows which were fortnightly. The show was broadcast for much of the war from the BBC Wales studios in Bangor, Caernarfonshire in Wales, where the BBC's Light Entertainment Department was based during World War II after an initial brief relocation to Bristol. ITMA followed the adventures of Tommy Handley as he undertook a series of (fictional) bizarre jobs that involved working with strange characters. The first series began with Handley working on a private radio station, but he later moved on to work as Minister of Aggravation and Mysteries at the Office of Twerps; the Mayor of seedy seaside resort Foaming at the Mouth; and Governor of the South Sea island Tomtopia.-WikiPedia Click here to read more about Its That Man Again

Be the first to comment on "last ever recording " 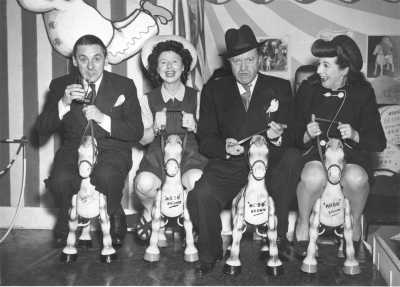