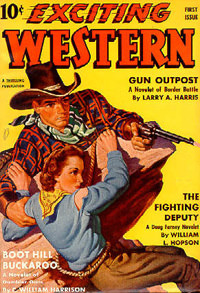 + W. C. Tuttle (November 11, 1883 – June 6, 1969) was an American writer who sold more than 1000 magazine stories and dozens of novels, almost all of which were westerns.Tuttle wrote mainly for pulp magazines; his main market was Adventure magazine. In a 1930 poll of its readers, Tuttle was voted the most popular writer in the magazine. Tuttle also wrote for other publications such as Argosy, Short Stories, Street & Smith’s Western Story Magazine, Field & Stream, West, New Western Magazine and Exciting Western. His best known character was Hashknife Hartley, who along with his friend Sleepy Stevens, served as unofficial detectives solving crimes on the ranches where they worked as cowboys. Critic Jeff Sadler stated Tuttle's writing is "at its best" in the Hashknife stories. Sadler also claims Tuttle's novel Vanishing Brands is his finest novel.."terse and dramatic, flecked with dry touches of wit, the novel is an excellent example of the Western form and a credit to its author".-WikiPedia Click here to read more about Hashknife Hartley And Sleepy Stevens

Be the first to comment on "the range war "