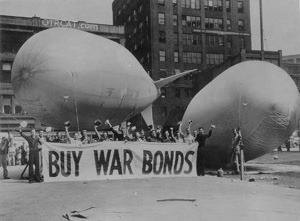 + Created by the U.S. Treasury Department to stimulate sales of war bonds and stamps, Treasury Star Parade was produced in New York and Hollywood and syndicated to radio stations across the U.S. The U.S. Treasury Department sponsored the radio series in 1942 and 1943. The program recruited major writers for radio such as Arch Oboler, Neal Hopkins, Violet Atkins, and others to write “patriotic” scripts based on the scenario “if Hitler won the war, America will have to expect…” The radio series featured major American actors from Broadway and Hollywood such as Edward G. Robinson, Bette Davis, Lynn Fontanne, Lionel Barrymore, Henry Hull, John Garfield, Fredric March, Alfred Lunt, Vincent Price, and Orson Welles. Eleanor Roosevelt even appeared on the radio show. Actress Jane Froman was a frequent contributor to the show. These actors and many others donated their time in producing 15-minute performances to support the war effort. Musicians such as Bing Crosby, Kay Kyser, Bob Crosby, Harry James, Rudy Vallee, Xavier Cugat, Fred Waring, and Ted Lewis, were also on the show. Treasury Star Parade was broadcast three times a week. The radio program was syndicated to more than 800 radio stations in the U.S. The 15 minute episodes sought to “personalize” the war, to bring it home and into the living rooms of average Americans, by producing melodramatic and highly emotionally-charged dramatizations of the war. The objective was to shock and galvanize average Americans and to draw listeners out of their secure shells and comfort zones. The scripts were meant to make Americans experience and feel viscerally the trauma, anxiety, fear, and psychological terror of war. Average American citizens were to experience the war via the radio to simulate what U.S. troops underwent in combat. The U.S. Treasury Department also sponsored the Treasury Salute radio program to stimulate the sale of war bonds and stamps, to buy “more than before”. Treasury Salute featured biographies of members of the U.S. military forces and dramatized real events. In the 1950s, the radio program became known as Guest Star. Click here to read more about Treasury Salute 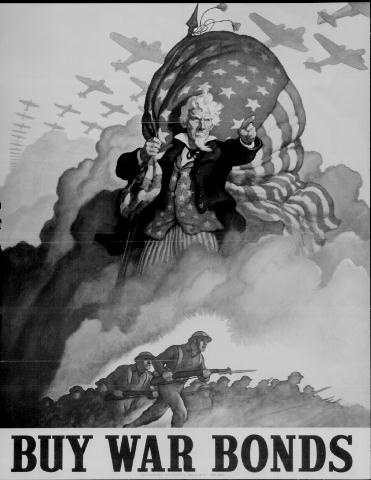