+ Władziu Valentino Liberace (May 16, 1919 – February 4, 1987), mononymously known as Liberace, was an American pianist and vocalist. A child prodigy, and the first generation son of working class immigrants, Liberace's career spanned four decades of concerts, recordings, motion pictures, television, and endorsements. At the height of his fame from 1950s to the 1970s Liberace was the highest-paid entertainer in the world, with established residencies in Las Vegas, and an international touring schedule. Liberace embraced a lifestyle of flamboyant excess both on and off stage, and acquired the sobriquet "Mr. Showmanship". Liberace was recognised during his career with two Emmy Awards, six gold albums and two stars on the Hollywood Walk of Fame.-WikiPedia Click here to read more about Liberace Program, The

Spoiler : He composed his own theme, which was "I Don't Care." 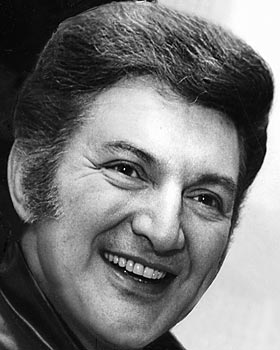