+ Nehi /ˈniːhaɪ/ (pronounced "knee high") is a flavored soft drink that originated in America. It was introduced in 1924 by Chero-Cola/Union Bottle Works. The "Nehi Corporation" name was adopted in 1928 after the Nehi fruit-flavored sodas became popular. In 1955, the company changed its name to Royal Crown Company, after its RC Cola brand. It was founded by Claude Hatcher, a Georgia grocer, who began bottling ginger ale and root beer in 1905. As of the middle of April 2008, Nehi had become a brand of Dr Pepper Snapple Group.-WikiPedia 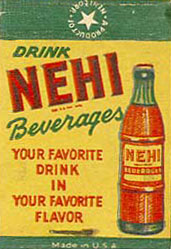