+ John R. "Johnny" Cash (February 26, 1932 – September 12, 2003), born J. R. Cash, was an American singer-songwriter, actor, and author, who has been called one of the most influential musicians of the 20th century. In 1954, Cash moved to Memphis, Tennessee, where he sold appliances while studying to be a radio announcer. At night he played with guitarist Luther Perkins and bassist Marshall Grant. Perkins and Grant were known as the Tennessee Two. Here is a rare recording of "The Johnny Cash Radio Show" from around 1954 at a radio station in Memphis, Tennessee. The show aired at 4 P.M. This is the very first episode of his radio show. Click here to read more about Johnny Cash Show

Spoiler : LOVED this episode. Dylan's respect for the great Johnny Cash was evident, as was Johnny's for Bob. Two true, genuine legends of music. 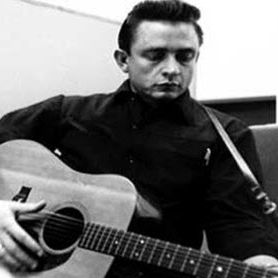