+ I Sustain the Wings was composed by Glenn Miller, Chummy MacGregor, Norman Leyden and Bill Meyers. This was the theme music for the radio program that was broadcast weekly on Saturday on NBC from June, 1943 to June 10, 1944 by the Army Air Force Band under the direction of Captain Glenn Miller. The radio show was initially on CBS. Glenn Miller was the host and conductor on the show, which also featured Ray McKinley, Jerry Gray, Johnny Desmond, and the Crew Chiefs, until June 10, 1944 when Harry Bluestone became the conductor. The Latin Sustineo Alas, "I Sustain the Wings", or "Keep 'Em Flying", was the motto of the U.S. Army Air Forces Technical Training Command. The I Sustain the Wings radio series continued until November 17, 1945. Major Glenn Miller and the American Band of the Allied Expeditionary Force also made recordings for the BBC and the Office of War Information (OWI) from October 30 to November 20, 1944 at Abbey Road Studios in London that were broadcast over the American Broadcasting Station in Europe to Germany in a program called Music for the Wehrmacht or The Wehrmacht Hour. General James H. Doolittle, Commanding General of the US 8th Army Air Force, told Miller: "Captain Miller, next to a letter from home your organisation is the greatest morale-builder in the European Theater of Operations." The song also contained lyrics. The opening lines are: "For the land that I love, I sustain the wings" In the sky above where they fight to victory/ There's a plane in the sky, and the song it sings/ Is the freedom cry and a pray'r for you and me." The sheet music for the composition appeared in the 1943 songbook Glenn Miller's Dance Folio published by the Mutual Music Society in New York.-WikiPedia 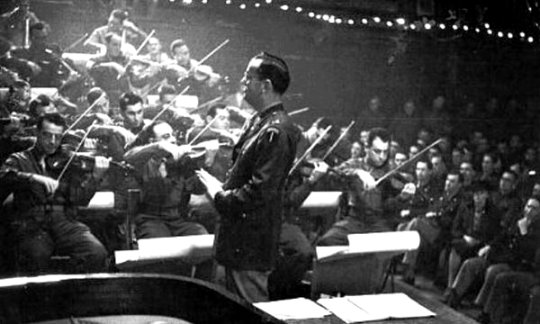 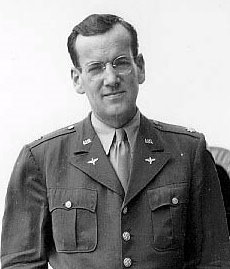