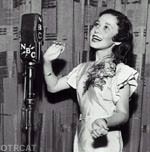 + Connie Haines (January 20, 1921 – September 22, 2008) was an American singer. Her 200 recordings were frequently up-tempo big band songs with the Harry James and Tommy Dorsey orchestras, and Frank Sinatra. She began performing at age 4, and by age 9 had a regular radio show performing as "Baby Yvonne Marie, the Little Princess of the Air". After a number of regional successes and winning the Major Bowes contest, she was hired by Harry James, who asked her to change her name. She became the lead singer on the Abbott & Costello radio show from 1942 to 1946. She later joined Tommy Dorsey, and Haines credited Dorsey with developing her style further. Haines performed in a number of films, including Duchess of Idaho. She later did a television show with Frankie Laine.-WikiPedia Click here to read more about Connie Haines

Be the first to comment on "it had to be you "