Benny Goodman, born Benjamin David Goodman, was an American swing and jazz musician considered as the "King of Swing."

Born to a poor family, Goodman learned to play the clarinet at such a young age. At age 12, he started to appear on stage, imitating Ted Lewis, a famous clarinet player and bandleader. He was then discovered by Ben Pollack, who hired him to play in his band. Goodman's first recording was made in 1926 with the Pollack's group. In 1928, he had his own recording (his only known solo) that featured baritone and alto saxophones.

When he left Chicago to go to New York, Goodman went on to become a successful personality, joining lots of equally-famous people in New York Studios. His first band was formed in 1934, with Bunny Berigan, Jess Stacey, and Gene Crupa as his co-members.

In the next 50 years that followed, Goodman continued to make recordings and go to trips to the Far East. He also participated on numerous concerts, until his death in 1986 due to heat attack. That same year, he was also given the Grammy Lifetime Achievement Award. Click here to read more about Benny Goodman

Spoiler : Goodman began playing clarinet at age eleven in a childrens band at Chicago's Hull House. He formed his own band in 1933 and became one of the most popular band leaders and musicians from the 1930's until his death in 1986. He is credited with being one of the first orchestra leaders to integrate African-American musicians into big bands by hiring Lionel Hampton and Teddy Wilson. The Benny Goodman Orchestra was featured on radio programs including Let's Dance on on NB (1934-1935); The Camel Caravan (Benny Goodmans Swing School) on NBC (1936-1939); The Benny Goodman Show on CBS and Mutual (1939-1946); Holland Housewarming for NBC (1941); The Victor Borge Show on NBC (1946-1947). 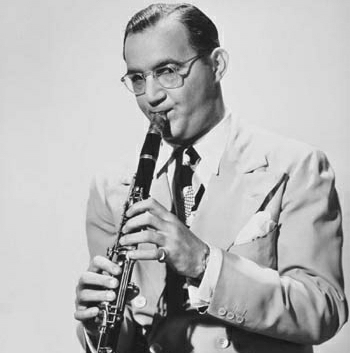