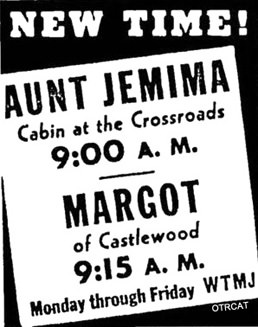 Something about radio advertising and breakfast foods just naturally go together. The pancake mix created by Chris Rutledge and Charles Underwood used the image of a chubby smiling Mammy as a brand image for Aunt Jemima Pancakes. Although the image on the box was just a painting, finding an actress to portray the character was a natural move.

The Aunt Jemima Show featured great musical numbers from the Jemima Chorus and advice from Aunt Jemima herself on how to make the tastiest pancakes. WARNING: Listening to this program may cause cravings for maple syrup!

The first real-life Aunt Jemima was former slave Nancy Green, who signed an exclusive lifetime contract with the pancake mix makers in 1893 to make public appearances as the character.

Spoiler : Radio show data and a special article on the Sexist & Racist point of view on the character. The programs are in very good high code sound. 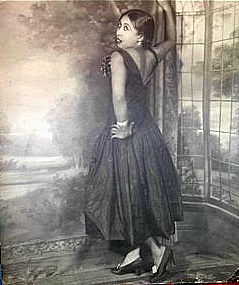