+ Thomson "Tommy" Bartlett (July 11, 1914 – September 6, 1998) was an American showman and entertainment mogul from Wisconsin. Born in Milwaukee, Wisconsin, Bartlett began his career in entertainment by becoming a broadcaster at radio station WISN at the young age of 13. After moving to Chicago, Illinois, he became a staff announcer at the CBS-owned WBBM radio station. He continued here until the outbreak of World War II, when he learned to fly and subsequently became a flight instructor for the United States Army Air Corps. In 1947 he returned to radio, hosting a show entitled-WikiPedia

Be the first to comment on "first guest ronald mcpherson " 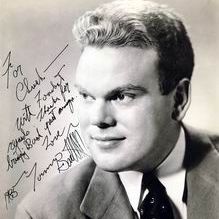