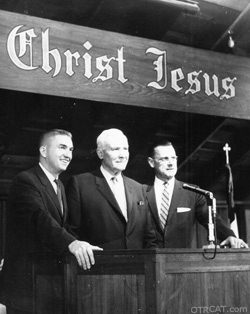 + Charles Edward Fuller (April 25, 1887 - March 18, 1968) was an American Christian clergyman and a radio evangelist. Charles Fuller was born in Los Angeles, California. After graduating from Pomona College in 1910, he worked in the citrus packing business in southern California until 1918. He then studied at the Bible Institute of Los Angeles (now, Biola University), later becoming chairman of the board. Initially a Presbyterian, he became a Baptist minister in 1925. He gained renown as the radio host and speaker of The Old Fashioned Revival Hour, a weekly Sunday broadcast that aired from 1937 to 1968. The first nationwide broadcast occurred on October 3, 1937, on the Mutual Broadcasting System. Beginning in 1951, the program was carried on the ABC Radio Network, heard on more than 650 radio stations.-WikiPedia Click here to read more about Old Fashioned Revival Hour

Spoiler : In 1925, a young pastor named Charles E. Fuller saw vast possibilities in the new invention called “radio”. He soon resigned from his pastoral responsibilities to give his full time to radio evangelism. On October 3, 1937 the Old Fashioned Revival Hour aired its first broadcast over the 13 stations on the Mutual Network. In 1941 Fuller’s nationwide broadcast was moved from a Hollywood studio to the Long Beach Municipal Auditorium where thousands of servicemen, in route to the Pacific during World War II, attended the broadcast. Dr. Fuller and his OFRH musicians traveled throughout North America, holding citywide rallies that were often broadcast live. By 1951 the program was heard over the ABC radio network which circled the globe over 650 radio stations. The program was syndicated by The Gospel Broadcasting, at times the programs were called Gospel Hour and The Pilgrim Hour featuring Charles E Fuller. Dr. Charles E. Fuller and his associates of the Old Fashioned Revival Hour appeared in the Long Beach Municipal Auditorium for the last time on January 12, 1958 and later moved the program to a Hollywood recording studio for a 30-minute broadcast. Dr. Fuller’s last broadcast was on December of 1968, and he went home to be with the Lord that same year.