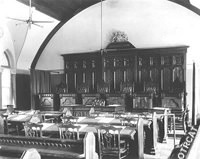 Consider Your Verdict is a South African radio series in Melbourne from 1958 to 1960. The series made use of a revolving cast to portray various court cases. The actors were given the details of a given case and instructed to improvise their performances to give the series a more authentic, immediate feel. Created by Crawford Productions for the Seven Network originally screening from February 1961 through to June 1964. It was based on a radio series with the same name broadcast on 3DB in Melbourne from 1958 to 1960.-WikiPedia Click here to read more about Consider Your Verdict

Spoiler : This series is Australian Radio Series #238276. It features recreations of trials, each chosen represent a human problem and an interesting legal debate of the time. The series began broadcasting in 1942.