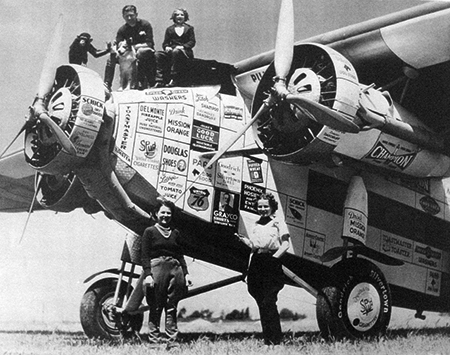 + Colonel George R. Hutchinson (February 11, 1902 - August 21, 1989) was an American aviator and media personality of the 1930s. In 1931, George, Blanche and daughters Kathryn and Janet Hutchinson (1925 - ) became nationwide celebrities as the Flying Hutchinsons, when they visited the capitals of all 48 United States by air. Further fame came when 'the Flying Family' attempted an around-the-world flight the next year; their Sikorsky S-38 aircraft crash-landed off Greenland, and the family were stranded for several days before being picked up by a fishing trawler and transported to the United Kingdom. George and Blanche wrote two books about their adventures - The Flying Family in Greenland (1935) and Flying the States (1937) - and the family were pictured on cereal boxes and made appearances on stage and radio. In 1939, the family attempted another around-the-world flight in a Lockheed Electra. The stated aim of this flight was to carry a scroll with a message of peace to the '68 nations of the world' (sic), but this flight only made it as far as Mexico before it was cancelled due to the outbreak of World War II. Despite the early cancellation of the flight, an NBC radio dramatisation was subsequently produced, starring the family themselves.-WikiPedia Click here to read more about Flying Hutchinsons, The

Be the first to comment on "scroll of all nations "