syndicated radio series. This series resembles I Love a Mystery, which was also written by Carleton E. Morse. This is one of the best adventure-thriller series ever produced for radio. The series kicks off with Captain Bart Friday and Skip Turner in a fog-shrouded Northern California graveyard where the dead walk, wolfmen prowl and ghouls roam.

Hearing stories of honor and adventure is an important part of turning boys into fine young men. It doesn’t hurt that everyone enjoys hearing well written and performed adventure stories. In 1944, just after D-Day, NBC began airing Adventure Ahead.

The producers turned to great adventure fiction from literature for plots, using authors like Daniel Defoe, Stephen Vincent Benet, Waldo Fleming and others. They even received J. Edgar Hoover’s blessing for a guided tour of the nation’s premiere law enforcement agency on “Inside the FBI”.

Although the program featured some of the network’s best talent, the show placed the stories center stage. The target audience was young men old enough to begin feeling their oats but not quite old enough to start noticing girls, but the quality of the program was high enough that everyone would enjoy listening. 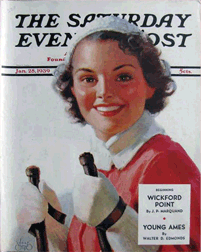