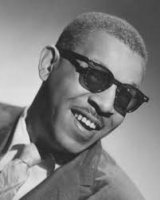 Spoiler : Born in Tyro, Mississippi. Died 4/24/2001 at age 85 at the Holy Cross Hospital in Chicago, Illinois. Hibbler was born blind, never went to school until he was 15, when he attended the Arkansas School for the Blind. Baritone singer that Duke Ellington claimed was, "tonal pantomime" because of his fast, muscular vibrato, growling and crooning songs with an English accent, for which he turned into emotional rides. He began his singing career with his church choir as a soprano, but during his teenage years, his voice dropped, and he began singing Blues in Arkansas and Texas bars. He auditioned for Ellington's band in 1942, but after celebrating the audition by getting drunk, singing with the band in Little Rock, Arkansas, Ellington told him he wasn't ready to sing with his band, that while "he could accept a blind singer, but not a blind-drunk singer." Hibbler became a vocalist with Jay McShann's band, then joined Ellington's band in 1943, with Ellington composing "Do Nothin' Until You Hear From Me" especially for Hibbler. He was a featured singer with Ellington's band until 1951. His recording career hit the skids during the 1960's because record companies were afraid to sign him, as Hibbler became involved with the Civil Rights movement during the late 1950's. However, Frank Sinatra hired Hibbler to sing on one album, "Monday Every Day," recorded for Reprise label. In 1972, Hibbler recorded an album with Rahsaan Roland on the album, "A Meeting of the Times." Following that, Hibbler worked infrequently as a singer until his death, making his last public performance in January, 1999 at a Jazz at Lincoln Center evening featuring Duke Ellington alumni, appearing at a late-evening party.