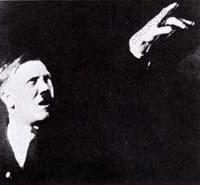 Adolf Hitler, also known as Fuhrer (a tyrannical leader), was a German leader and the head of the Nazi Party who led the Nazi regime that killed more than six million Jews in the well-known Holocaust from 13-1945. Click here to read more about Adolf Hitler